Nowadays many women post on social media pictures of things their husbands buy or do for them and say “best hubbie in the world”. Props to those guys…but I can truly say I am married to my absolute best friend. I don’t need a girl’s night out. Or a weekend in Vegas. Even a spa day doesn’t cut it. Do I enjoy all those things? Maybe, sometimes, or not ever. But plop me on the couch with my husband, a great movie, like Casablanca (to be explained in the small blond section), and a (couple of) glass(es) of wine, and I’m set. Or a road trip to northern Arizona, where there is weather similar to the rest of the country, and I’m content just sitting in the car with him, neither of us saying a word. Until the small blond pipes up from the backseat…

I first met Matt my senior year of college on a blind date. Typical story…just got out of a long relationship, didn’t want to date anyone, insisted on having fun and being free my last year before real adulthood, blah blah blah. Isn’t that how life happens though? When you least want it or expect it? My sorority roommate was dating Matt’s roommate, and they gave me about a month to lick my wounds, and then they began the onslaught. “He’d be perfect for you, he’s so nice, he has a job”…gee, thanks. But wouldn’t you know, aside from some immature behavior, which I later determined was simply a side affect of Matt and his roommate being together (to this day they still act like that), the blind date went well and the rest is, well, history.

Since then, Matt and I have been on many adventures, our biggest one being our move across country from the heartland of Ohio to the Sonoran Desert of Arizona. We’ve been through weddings, funerals, pets, infertility, pregnancy, business ownership, and parenthood (several of which we are still working on). But after 17 years of being together, every now and then we realize we’re still not sick of each other! Guess that’s why I consider him such a “catch”.

Even though she is not yet three years old, Matilda is already an avid Star Wars® fan. So when her preschool declared Friday, December 18th, as “Star Wars Day” to celebrate the release of the new movie, she was really excited to dress up. My husband asked her who she wanted to be, and without hesitation she said she wanted to be Princess Leia. Specifically, the version in the ceremony at the end of Episode IV when she is wearing a shiny white dress and a chunky silver necklace. I know, awfully particular for a toddler, right?

With this conversation taking place on the Monday before the party, I whipped out my sewing machine and created an exact replica of the gown…then I woke up from my daydream and realized it was actually Tuesday, so I did what any rational working mom would do. I hopped on Amazon and found a kid’s version of the costume and a Rebellion emblem necklace, shipped it Prime, wiped the bead of sweat off my brow and considered the crisis averted.

Until Thursday came…don’t get me wrong, both items arrived in two days as Mr. Bezos promised. Matilda was so excited, we ripped open the package and she had to wear them immediately. That’s when it became apparent that in my haste I ordered the size for bigger kids and not the toddler version. Gulp. Every time she walked she stepped on the hem and I could hear the fibers ripping away quickly. This was not something safety pins could fix (believe me, I tried).

Evasive action had to be taken, the first of which included peeling the costume off a screaming, crying two-year-old hell-bent on wearing her new princess outfit. After lots of promises of treats and other such bribes, the costume was allowed to be removed and replaced by, of course, princess pajamas. Once Matilda was asleep I opened the door to the closet where I keep all the stuff I hardly use to figure out how I was going to fix this debacle in less 12 hours. It was then that I spotted my sewing machine, glowing like a beacon of hope in the darkness of the closet.

Here is where I’d like to take a moment to acknowledge why I even own a sewing machine. When I was growing up, my mom sewed everything…quilts, Halloween costumes, clothes, you name it. She even made matching outfits for me and my Cabbage Patch doll. So when I graduated college and rented my first apartment, as a right of passage she bought me a sewing machine. It was shiny with all sorts of buttons and even a foot pedal. “You can make your own curtains,” my mom said. Right…

I did eventually make curtains. Five years later. And my mom did most of the sewing. But now I was on my own. My daughter’s enjoyment of the Star Wars day hinged on my ability to pull this off. So I unearthed the machine, dragged it downstairs and set it up on the dining room table. “You’re not actually going to do that right now, are you?” my husband gawked. Yes I was tired. Yes I had other things to do. But due to the lack of emergency tailoring services in our area, there was no other option. I plugged in the machine, turned it on and sat down to start sewing.

Then both my head and heart sank. I still had to thread the needle. Ugh. How do I do that again? I whipped out the instruction manual and ten minutes later I was ready to roll. Lucky for me my mom was the last one to use the machine and had conveniently left a bobbin of white thread for me, almost like it was meant to be. I folded the material up and started to stitch a straight hem. Nothing fancy…just enough to make it last through the nextday.

It worked! I have to say, I was rather proud of myself. Here is Matilda right before going to school, and that smile was worth every stitch. Just don’t pay attention to the sleeves…the hem took long enough! 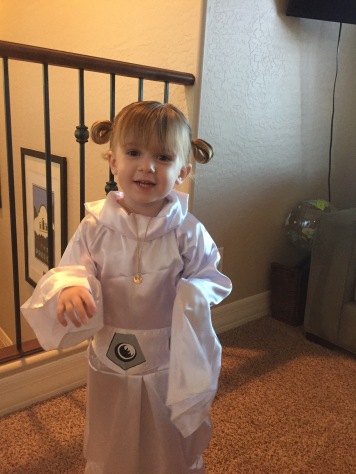